Minimals is a simulation sandbox game where you observe tiny organisms known as 'Minimals' grow and evolve. The primary purpose of Minimals is to showcase the process of evolution as well as related concepts such as natural selection, selective breeding, common descent, and descent with modification.

The primary focus of the game in this version is to showcase evolution via natural selection, which is the process in which organisms with favourable traits are more likely to reproduce and in doing so, pass on these traits to the next generation. Over time this process allows organisms to adapt to their environment as some organisms will gain traits that will allow them to better survive and reproduce, increasing the population of organism with these traits.

Members of a species are not all alike, partly because of differences in heredity (genetics). This is true even with children of the same parents. Some of these differences might make one organism better at surviving and reproducing than others in a particular habitat. When this organism reproduces, its children inherit their genes which gave it the advantage.

Minimals Evolution Simulator 3D showcases this process on a simple and smaller scale. The minimals have only one goals in this situation, to eat food (the white circles) in order to maintain the required energy levels to survive. Each minimal contains a set of mutatable traits that dictate how well a minimal can survive which are Energy Loss, Speed, Speed Decay and Colour as well as non-mutatable traits which are Name, Age, Generation, Health, Energy and Children. Once a minimal reaches a minute old and is able to stay at or above 85 health, it will asexually reproduce and create a child which its traits are passed down to. When born, minimals have a small chance for their mutatable traits to mutate and be altered slightly. These mutations allow for slight variation between generations of minimals and ones with more favourable traits will survive longer and therefore reproduce and pass down their traits. 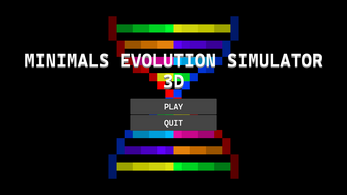 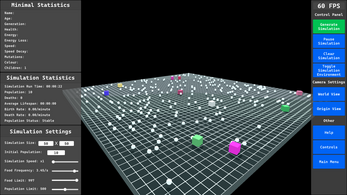 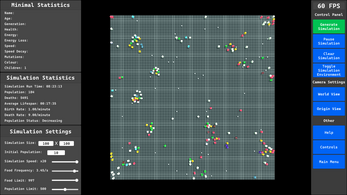 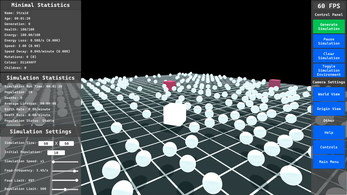 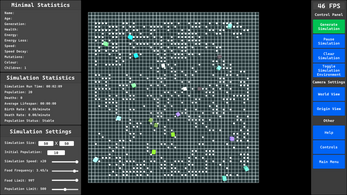